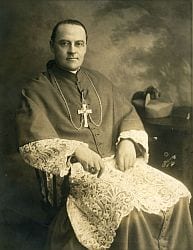 Archbishop Curley High School was founded as a college preparatory school under the leadership and direction of the late Archbishop Francis P. Keough in 1960, becoming the first of the archdiocesan high schools built in that decade. Designed by local architect Edward H. Glidden in what is now known as Mid-Century Style, the school was built on a thirty-three acre site on the northeast edge of the City of Baltimore. It was then the most densely Catholic part of Baltimore, with thousands of students in the many nearby parochial schools. The school is dedicated to Archbishop Michael J. Curley (1879-1947) who served as the tenth Archbishop of Baltimore from 1921-1947. The school is accredited by the Maryland State Department of Education and AdvancedED. Archbishop Curley High School opened its doors in September 1961 to a pioneer freshman class of 420. It was formally dedicated on April 17, 1962, by Lawrence Cardinal Shehan, the twelfth archbishop. Since its first graduating class in 1965 over 8000 graduates have received their diplomas.

The main three-story building still contains classrooms, science labs, administrative and guidance offices, while the attached wings have been modified over the years to accommodate new purposes. The chapel was renewed after the liturgical changes of Vatican II. The friary, the residence of the Franciscan Friars, was moved to one part of the original building, while the remainder became advancement offices, meeting space and the Library/Digital Media Center. The renovated auditorium was incorporated into the Holthaus Center for the Arts, new construction in 2010. The Student Dining Room and Fr. Julian Gymnasium continue as designed, while the final original wing of the school, first classrooms and then the library, now houses a fitness center and wrestling room.

The extensive grounds provide for ample parking and athletic facilities. The Curley Bowl features a synthetic turf field for football, soccer and lacrosse surrounded by a track. Other facilities include a baseball diamond, tennis courts, additional soccer field, and practice fields. 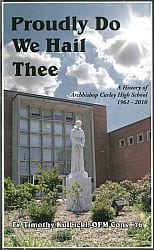 rley’s golden anniversary was celebrated in 2010-11 with special events throughout the year. A history of Curley was written by Fr. Timothy Kulbicki, OFM Conv. ’76 entitled Proudly Do We Hail Thee. The first graduates, the Class of 1965, celebrated their 50th reunion in May 2015 becoming the first “Golden Friars.”

Today Archbishop Curley High School serves students from the entire metropolitan area, namely Baltimore City and the surrounding counties. The student body comes from some 60 middle schools and 80 zip codes, choosing Curley, the only Franciscan high school for young men in Maryland, for its moderate size and family spirit, and for being a school “where brotherhood begins.” It was the first 1:1 iPad Catholic high school for young men in the area, with a premier arts program, 14 varsity sports, and a recognized college counseling program. With 100% of the Class of 2019 accepted to college, 89% of the 2019 graduates are attending 4-year colleges. The class earned more than $18.4 million in aid.

The general operation and management of Archbishop Curley High School falls under the auspices of the School Board established by the Archbishop of Baltimore. The School Board has continued to entrust the administration of the school to the Conventual Franciscan Friars of Our Lady of the Angels Province who have staffed the school since its inception. Dedicated laity now comprise the majority of faculty and staff, having embraced the Franciscan goals of education, and working to develop the whole person in both the classroom and co-curricular activities.

Archbishop Curley High,
Proudly do we hail thee.
Teach to us all your sons,
Faith, hope and charity.
We will be true to you,
In thoughts and words and actions too.
Your sons we’re proud to be,
O Curley High.