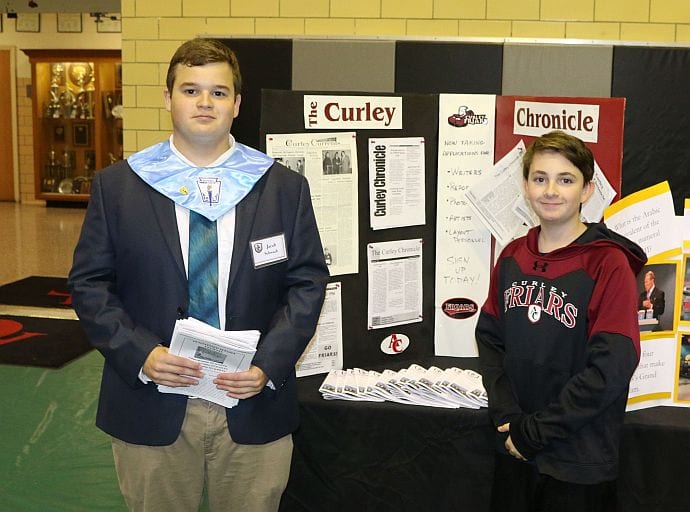 The Curley Chronicle is the school newspaper.  But journalism is changing and the way news is reported and received is changing.  To keep up with the times, the Chronicle will be both an ONLINE  and PRINTED newspaper where news stories, feature articles, reviews, surveys, art work, editorials and interviews, created by the students, are published.  In addition, news stories, which have a more immediate interest, will be reported on the news pages of the website.  Students may serve as editors, reporters, writers, artists, photographers and layout designers.

Click HERE to read the next edition of the Curley Chronicle October 3, 2019 (Volume 59 Number 2).

Click HERE to read the next edition of the Curley Chronicle September 5, 2019 (Volume 59 Number 1).

Visions is a literary/fine arts periodical that is published each spring by Curley students.

The CORD, Curley’s yearbook, consists of a 144-page hardback copy, delivered in May, and a 28-page spring supplement, delivered in September. The CORD staff works daily after school to produce a book of memories for the entire school community to enjoy. Meetings are held twice during the summer to make plans, and the staff works both before and after school five days a week throughout the school year.