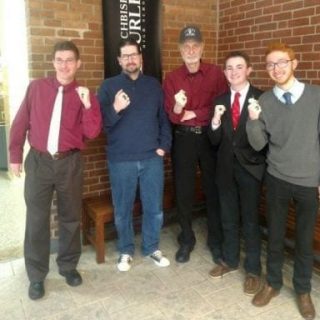 The Class of 2020 received their school rings during Mass on Sunday, December 2, 2018 in the Suehle Auditorium. Fr. Donald Grzymski OFM Conv ’70 was the celebrant and homilist. The Curley Schola provided the music for the Mass. After communion, Fr. Donald blessed the rings and placed them on the fingers of the juniors who presented themselves to the stage. The class recited the Ring Pledge and sang the Alma Mater, after which Mr. Tyler Cuomo ’08, History Teacher at Curley, gave the ring address. After the ceremony, a reception was held in the Student Dining Room.

When Patrick McDonald ’20 received his Curley ring last Sunday, he was the fifth in his family to do so. His brother Matt ’15 and his dad Joe ’81 were present. Also present were his uncle, Rob Lipa ’88 and his grandfather, Al Lipa ’65. (See photo at left) Congratulations to the three Curley generations of the McDonald family.